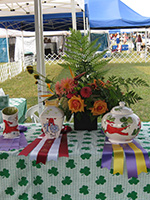 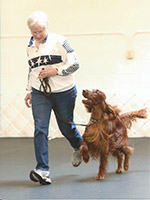 The goals of the ISCS are:  to do all that is possible to bring the natural qualities of the Irish Setter to perfection; to urge members and breeders to accept the standard of the breed as approved by the American Kennel Club as the only standard of excellence by which the Irish Setter shall be judged; to do all in its power to protect and advance the interests of the breed by encouraging sportsmanlike competition at dog shows, obedience trials, and field trials; and to conduct sanctioned and licensed shows, obedience trials, and hunt tests.

The Irish Setter Club of Seattle had its beginnings in 1967 when Irish Setter fanciers from Washington, Idaho, and Oregon got together to form the Irish Setter Club of the Northwest.  Despite the initial success of this regional club, American Kennel Club  requirements specified that clubs must be local in nature to receive AKC approval.  Because the majority of the members lived in the greater Portland area, it was decided to designate the club as a Portland area specialty club.

Although supportive of these changes, the Seattle area members soon found there was a need for an Irish Setter club in this area as well.  On November 1, 1970, they met and the Irish Setter Club of Seattle was formed.

Today the Irish Setter Club of Seattle consists of approximately 75 members.  The membership is spread throughout the entire Puget Sound area, and also includes Canadian and out-of-state members.

The ISCS has held annual specialty shows and  obedience trials since 1974.  We currently have two specialties each August.  The club also annually holds two hunt tests in May.

In April of each year, we have our Annual Awards dinner at which we recognize the accomplishments of our members and their dogs during the previous year, and elect our officers for the new year.  Other club activities include picnics and social get-togethers, walking in Seattle's St. Patrick's Day parade, grooming and handling seminars, public education events, and occasional "fun days" with the dogs.

Monthly meetings are generally held on Saturday evenings at the homes of members.

To get more information about the club, go to the Contact page